When Is It Most Dangerous to Drive? Any time you get behind the wheel of a car it involves a certain amount of risk. Yet, there are certain days and times of the day when that risk is significantly higher than others. Knowing the most dangerous times to be on the road can help you stay more alert and possibly save your life and those of the people you love.

Most Dangerous Times: Time and Day of the Week

According to data from the Fatality Analysis Reporting System (FARS), the most dangerous days to drive (as measured by auto accident fatalities) are the weekend – Friday, Saturday, and Sunday. Nationwide fatalities in 2016 were:

The riskiest time to drive occurs during the late afternoon rush hour – 4:00 p.m. to 7:00 p.m. This should come as no surprise since people are tired, distracted, and in a hurry to get home. Plus, road traffic is at its peak. This period is followed by early evening and early afternoon. Fatal accidents in 2016: 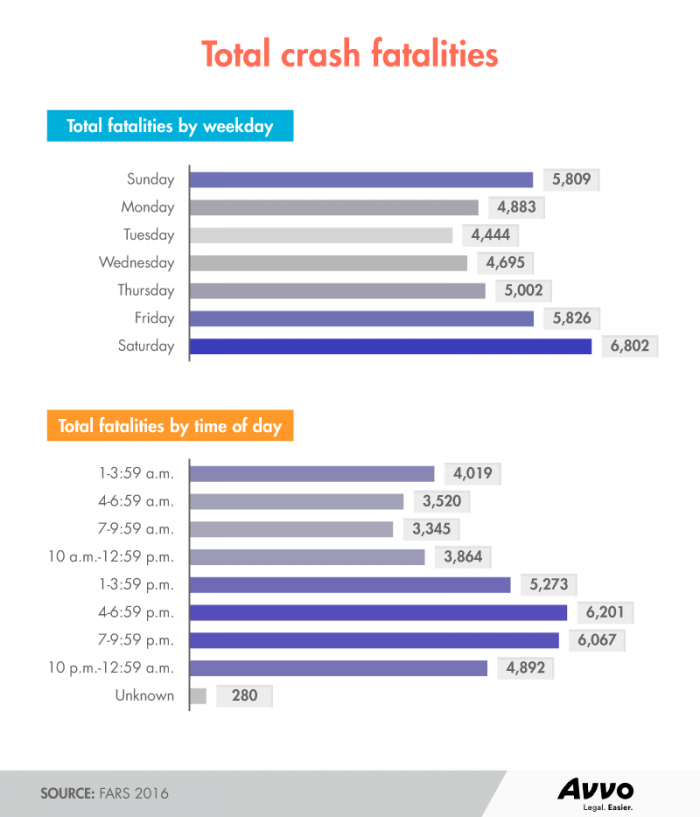 Holidays are a time of fun, enjoyment and visiting family and friends. Unfortunately, they’re also among some of the most dangerous days to drive. Partly because more people are on the road, but also because holidays and alcohol go hand in hand. As everyone knows, alcohol consumption and driving don’t mix. Using FARS data on the number of auto fatalities from 2011 to 2016, the most dangerous holidays for driving are:

Dangerous driving due to alcohol can be seasonal as well. The summer season usually offers good weather and driving conditions. But, according to the National Highway Traffic Safety Administration (NHTSA), alcohol-impaired drivers cause nearly twice the number of fatal auto accidents during the three months of summer than the other nine months combined.

Most Dangerous Times for Teenage Drivers

The summer isn’t good for teen drivers either, with the top seven days for auto fatalities occurring during this period. In fact, the period between Memorial Day and Labor Day is often called  “The 100 Deadliest Days” for teen drivers. This is due in large part to alcohol consumption. But, as a group, teen drivers are more prone to engage in risky driving behaviors such as texting and driving, too many people in the car, distracted driving, and speeding. Data from several sources – the U.S. Department of Transportation, the Department of Health and Human Services, and AAA – shows that:

Every Day Can Be Dangerous

Overall, what are the most dangerous days to drive? They typically change from year to year, but from a historical standpoint, Safemotorist.com lists them as follows:

Days of the year

Keep in mind there are 365 day in a year. Some days may not make the Top 10 list but they can still be quite dangerous. Many of them involve celebrations of special occasions or events accompanied by heavy consumption of alcohol.

For example, NHTSA found that auto accidents due to alcohol-impaired drivers killed someone every 51 minutes on St. Patrick’s Day in 2010. Those deaths amounted to 32% of all the fatalities that occurred that day. Other dangerous days include the Super Bowl and Cinco de Mayo. Localized celebrations, such as your baseball team winning the Worlds Series, may not have the national impact of a major event. But, they can make it a risky time to drive in your city.

No matter what the statistics say, there are three circumstances that can make any day your most dangerous day to drive. Those are driving under the influence of drugs or alcohol, texting while driving, and distracted driving. Avoiding these unsafe driving behaviors and staying extra alert during dangerous times and days will help keep you safe on the road and avoid an auto collision.